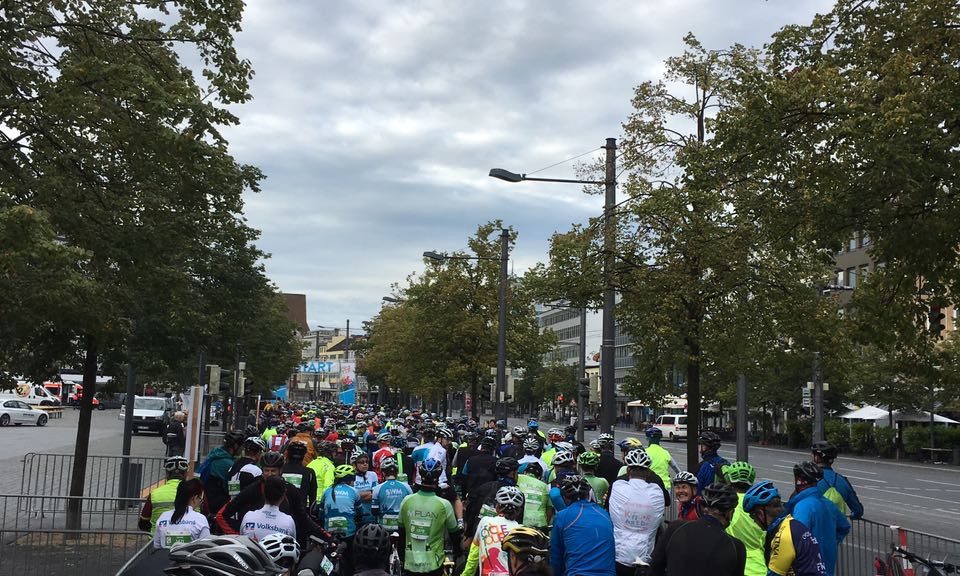 You know by now that I´ve been severely struck by a triathlon addiction. Maybe it is not an addiction, but a very strong passion for the sport at least. Unfortunately the tri season is frustratingly short and so I found myself by the mid of August without anything to do until next year. I was still hungry for some racing, but also welcomed the idea of easing up a bit with my training and allowing myself to have a bit more fun. Part of this fun was signing up for my first ever mass start road bike race.

The event I was going to race was a point-to-point from my hometown to the next big city to the east, Magdeburg. We were very lucky that our company paid the sign up fee and gave us new fresh jerseys to represent and so I found myself on Sunday morning surrounded by numerous colleagues clad in frog green jerseys.

My experience with group rides is extremely limited and consists mostly of picking up tips from the TrainerRoad podcast and of course years of watching the Tour de France as a kid. How hard can it be, right? I seeded myself carefully in the second block pinning myself at 30 kph, which is what I would expect solo on my road bike. It was a crisp morning and I was relieved when we could finally start rolling through the neutralized phase. After 7 km or so the motorbike pulled off to the side and it was on. I was feeling good that morning, was freezing and got very excited so I latched onto the next best wheel flying past and quickly caught up 20 or 30 positions. I wasn´t sure what my strategy might be and what to expect, but I figured as long as my legs didn´t turn blue I should be fine. I could always drop back but until I had to I let it fly.

After about 10k I found myself in a group of maybe 20 riders. We were somewhere between the lead group and the main pack when we headed into the only hilly bit of the course. Riding in a pack was pretty scary at first. It took me a while to creep up to anyone’s wheel to within a foot and even at that distance I was expecting shock, blood and carnage any minute. Luckily when we went into the hills the pack broke up and I could hold my own very well. I climbed at the front of a longer pace line, always making sure to maintain a quick spin and constant power output. It went well, but pretty much since the start I had to pee and couldn´t hold it any longer, so on top of the climb I dropped to the side and did what I had to do. This of course meant that my group was gone and I had to try to hang on to the next one. The first flew by too fast, but I managed to hang on to a few riders trying to catch up with them. From there it was a short downhill followed by a few rollers. Working together with one guy who evidently crashed early, but seemed otherwise competent I tried to bridge up to the pack in front, and after fighting like hell we made it. From here on the group would stay together pretty much until the finish line.

The following miles were uneventful. The group was too big to properly work together, some would drive the tempo, but we never really got a proper train running. At one point we hit the most brutal east german cobblestones and I lost one of my water bottles. A few weeks ago I had got myself a cageless bottle after my LBS assured me these would hold even in the worst conditions. Evidently they didn´t and so I was left without water for the final 35km.

The rest of the race was calm except for the final stretch coming into the city center. The course went on the dual carriageway leading into town, which was the coolest thing ever. Spurred on by the wide and open road the pack sped up. Sitting in the middle I overheard a few guys next to me, all sporting the same team jersey, discussing a break and to try to put some time between them and the field. Uncoordinated as the field was we wouldn´t have caught a train of 4 or 5 people when they worked together. I asked if I could come once they went and they said yes. This was easily the most exciting part of the race. Watching road races as a kid I was always amazed by guys making a break and leaving the pack behind. I was fascinated how once you put 20 or 30 meters between you and the rest you´d be good. So after a few minutes we decided to go when one of the guys jumped and we followed. I held his wheel until we were maybe four bike lengths in front and then took a good pull myself. I gave it all and pushed very hard for a few minutes and put about 35 meters between us and the field. Once I turned around of course all my newly found buddys were nowhere to be seen. And I wasn´t brave enough to go the remaining 12 km all by myself, so I gave up and drifted back into the field. I didn´t talk to the guys again, but what was I supposed to do? Did I drop them when I pulled? Did the two of us who went first dropped the others? Did they just fuck with me and watched me bury myself pointlessly? I guess I´ll never know, but I think it might be cool to join local group rides more often in the future.

The rest of the race was easy, but again so very cool rushing through closed city streets at full chat in a group and with spectators everywhere felt really awesome. Eventually I finished in 2:34 which put me somewhere in the middle of the pack. Averaging 39 kph put me nowhere near the top boys – I love road racing!

One thing I learned is that mass start road racing is a completely different animal than time trialing in a triathlon. The riding is much more exciting or at least you can make it exciting if you wanted. I´ll definitely do this gain and hopefully I don’t have to wait for a full year!