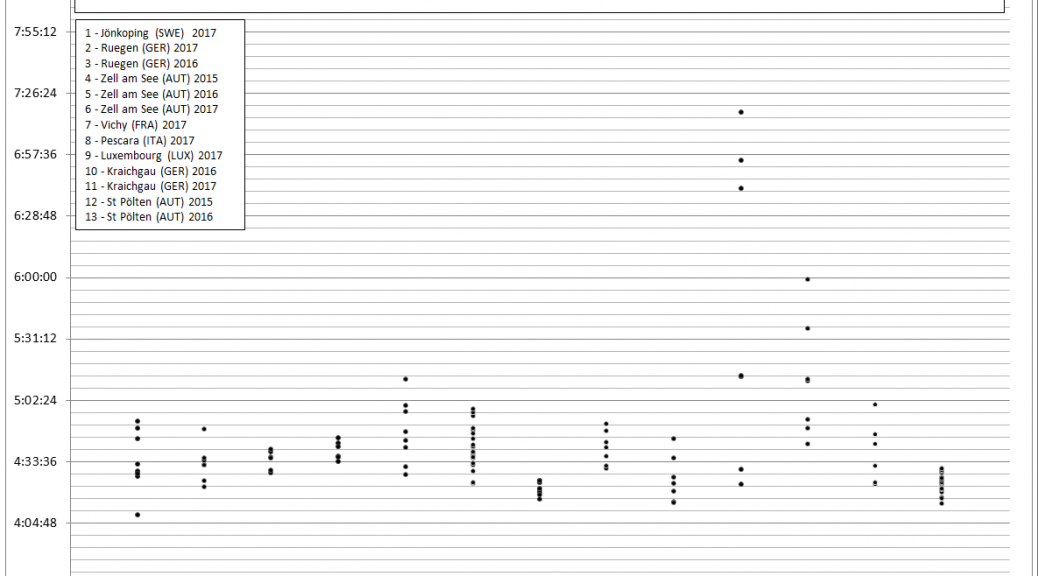 After an acceptable start into the world of middle distance triathlon last year I was wondering what my next goals should be. I´ve never considered myself a hardcore Type A athlete, but I still like to see how much I´ve got and how far I can push myself. You could say I´m highly competitive but I´m not willing to throw my family life, my career and and my social life completely under the bus. Also, I find it extremely hard to stay motivated unless I have a clear and tough but reachable goal in front of me.

Triathlon has provided me with new perspectives. I am very lucky and managed the „just finishing“ part and found myself somewhere between the front and middle pack. Since then my swimming and biking has improved significantly and now I wonder what´s next. One immediate goal was to go sub 5 hours on the 70.3 distance, and I would have done so if I had had a babysitter. Last race I swam 33 minutes and biked a 2:33, but then I had to run home to watch our baby. The next obvious goal – at least for maximum bragging rights to non-triathletes – would be to qualify for 70.3 worlds. Could I realistically achieve that? What does it take, do I have it in me?

I am not deluded and pretty sure that I won´t be a serious contender for my AG podium. Digging through past result I might one day knock on the door of the top 10, but that´s it. And that would take many arguments with my wife and probably some throwing up. So, how far away are worlds from where I am now?

It turns out that organized data is pretty hard to come by. I did some clicking through the IM website, but it appears that race directors / national tri unions handle things very differently. There is no historical data for races outside Europe, for European races there are some who made the slot allocation along with AG rank and finishing time of past races public. In total I collected data from 13 races and analyzed the slot allocation for the age groups M30-34 and M35-39 for a total of 122 slots allocated and claimed. Of those 122 slots, 88 went to athletes in the top 20, so a  17% chance to make the cut. 75 of those were in the top ten. So one thing seems clear – unless you are betting on a wild freak race like Kraichgau 2015 you should at least make the top ten of your AG. Once you´re top 10, your chance of being awarded a slot shoots up to 28.9%.

What time do you need to make the top 10? Well, it depends. Obviuosly on the course, but also on the weather and time of the year. I will dig into the general question of „what makes a top 10 AGer“ in a different post. The finshing times of those awarded a slot in the 13 races I analyzed are shown in the figure below. It is spread more widely than I expected. The most extreme races were Vichy, France 2017, where 12 slots were allocated to M30+M35 and the slowest to claim his spot finished in a brutal 4:24:33. The other extreme was Kraichgau, Germany 2015, where 14 slots went to M30+M35 and 9 of those went to finishers >5 hours with the slowest coming in at 7:17:39.